I just ate weeds for breakfast. I know what you're thinking.

With a ten-month old and a home office, weeds are abundant in my garden. They share prominent real estate with a handful of cultivated and volunteer vegetables and herbs. In fact they are taking over the neighborhood. However, we are lucky that two of the weeds are actually edible. They are quelite (kay-lee-tay, a catchall term for a handful of species including lamb-quarters and some from the Amaranth family) & verdolaga (vare-dough-lah-gah, otherwise known as purslane), two naturalized plants that are common weeds in gardens and open spaces worldwide.
Once, my mother-in-law, upon seeing how we had verdolaga & quelite in our garden, told me that she really liked to eat them. So a few nights ago while we were in the garden to harvest some kale before putting the baby to bed, I got the urge to pull up some weeds but this time decided to set them aside for my mother-in-law. I washed off the dirt from the roots, popped the bag into the refrigerator overnight and the next day put them in the truck while running errands, planning to drop them off at her house.
Of course, one thing after another came up and the trip to stop by my mother-in-law's house to drop off the verdolaga never materialized. So I was left with a bag of weeds still in my refrigerator and an old school tendency to not waste anything weighing on my conscience.
"Just give them to the chickens," Margo said, "it's better to eat them when they're fresh." I guess he has done this before. Although he says he's not fond of them, I suspect it has to do with the fact that locally they're seen as a poor folks' vegetable, and he probably got served one two many plates of them as a kid growing up. I think he was getting nervous I might cook them myself and try to obligate him to try them. I agreed and decided to chuck the bag to the birds.
What I didn't tell him was that I had reserved a smaller bag for myself to try them at some point during the week. My curiosity had been piqued. I couldn't get over the fact that on a recent trip to San Miguel de Allende, a chi-chi organic restaurant (which I'd put the link to except I can't find it online! I think it's Cafe Roma, behind Natura organic store off Zacateros) had served me a platter of curry chicken with sauteed verdolaga on the side and charged me an arm and a leg for it to boot. Here I was with free oodles of it and nothing to lose by giving it a try. 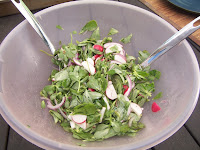 So this morning I went for it, sauteeing it with diced onions, turkey sausage, a tomato/garlic based-sauce, and folding in scrambled eggs. It was delicious. Now I really have to get some over to my mother-in-law. Before typing this up, I did a quick search on the term. It appears as if purslane is not only edible, but medicinal, cosmopolitan, and making a comeback as a celebrated ingredient in sophisticated meals, as included in some recipes on this blog.
Weeds, your moment has arrived. Now on to our quelites.
Posted by Nicole at 1:32 PM