Milestones Along the Road to Normal

Several milestones are happening at this time for my family. Almost a year has passed since our daughter was born. My Mexican naturalization is impending. It's been almost five years since we arrived in Mexico. We need to wait out a ten-year period before we're able to apply for any waivers or pardons on the way to applying for a visa for Margo to legally re-enter the U.S. So in other words, we're "halfway there."

To me, it feels both ironic and "just right" that a lot of these milestones run together. One of the things I used to say before we moved to Mexico, when people listened in horror that we had to wait at least 10 years before we could even apply for his visa, was "if I can last ten years in a foreign country, I may not even need or want to move back."

If you had asked me about that statement the first year, or even my third year here, I'd be hard pressed to imagine being able to stick out even the first half. Even though I was blessed with all sorts of opportunities like building my home, I couldn't see the forest for the trees because of the stress of adjusting culturally. Life was inevitably never going to be the same, and that took time to accept. Reinventing myself professionally was and is an ongoing process, something I'm still working toward feeling comfortable about (no pun intended). Even into my fourth year here, when I fantasized about having a child but couldn't visualize what it would be like, finding out I was pregnant was a crisis for me until I got a caregiver support network in place.

Motherhood brought on a second round of social opportunity, different than the first one I experienced in 2008 when I first started meeting expats here. Several new friends were made through mom's groups—it still amazes me that my daughter led me to be more social before she was even born, and that continues now that she's here. Befriending a couple in town who're here for the same voluntary deportation and "life on hold" problem as Margo and I, made me realize how much I have to offer in terms of just plain "been there" kind of advice.

Now, having made it to "halfway," not just us, but us with a baby in tow, feels like a major accomplishment. Even though we still have our ups and downs, with downs that can still often feel fairly low, the ups are getting more frequent and the spaces in between feel more "normal." My therapist and other friends have always wondered out loud to me: what is normal, anyways, Nicole? A book I read about the emotional adjustments that occur before, during and after pregnancy even has a chapter entitled "The New Normal." The word is often used to refer to an average state of being—an elusive social construct that is often mentioned but rarely achieved.

In my case, "normal" invokes a happier, calmer existence—a state that I've often experienced but couldn't always count on. You could say that distance from family, friends, and the comforts of my homeland, things I miss in NY & CA; contribute to a feeling of disorientation when faced with things that throw me for a loop here, such as a lack of law enforcement, cultural differences, or widespread appreciation for nature that I cherish so much.

And yet, as anyone who's had children or has lived a long-term traumatic situation knows (just for the record, although they're in the same sentence, I don't consider the former to equal the latter!), patience can go a long way in softening your response to life. Even though I hated to admit it before I finally decided to have kids, just the simple act of aging and maturing can increase your capacity to tolerate certain things. Or even to let things happen themselves, maybe with your assistance, but without your direct control. Sort of how the revered and controversial Sikh guru Yogi Bhajan says: "patience pays."

So I find myself incredibly grateful for all the things that have occurred in my life that have gotten me to this point: having the courage to move far from home despite how painful it can often be, having been able to see through the most frustrating moments of adjusting to a new country in order to stay with my husband, even opting to obtain naturalization in that country...having had our daughter, and the good fortune to have a wonderful partner who wants to raise our daughter with a much different relationship than he had with his own father.

I'm grateful for the transformation I was able to make as a very scared, tentative, worrisome expecting woman into a confident, loving mother who makes mistakes but knows that my love for my daughter is the most important thing. I am grateful for the little things. I am grateful that I know that I'll continue to be more and more so as the years go by.

It dawned on me that anyone who's been transplanted around the world or even from one side of town to the other could be grappling with these same feelings. I realized that I knew more than just a few folks with binational family living situations and similar interests, and started an online group with the hope it might connect some of us, or even grow. It might spark something, it might fizzle, but at least the seed was planted.

Which leads me to believe I could be experiencing the beginnings of yet another milestone that, 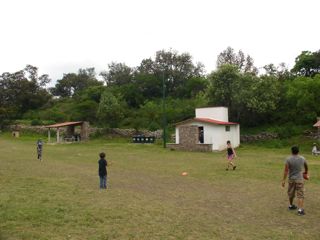 since leaving the States, has felt difficult to regain—what my therapist refers to as "finding my tribe." It's rapidly moving target that's also constantly shapeshifting. But while simply throwing a frisbee around with friends at a beautiful state park this weekend, I declared that doing things like this made me feel "normal." They all laughed at me, but I have a feeling they know what I meant.
Posted by Nicole at 4:15 PM